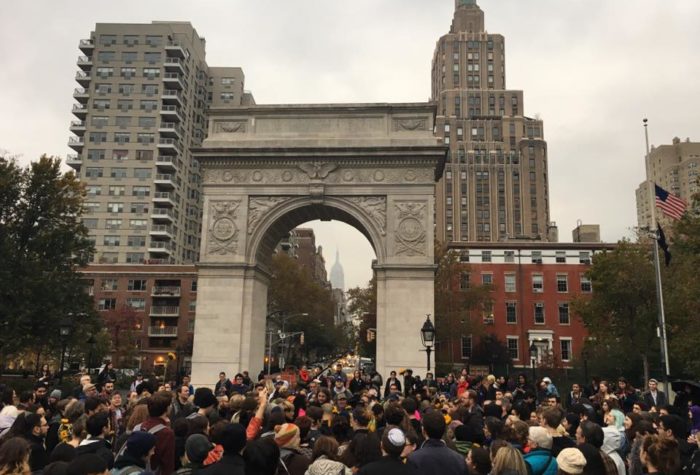 Progressive Christians to “Take Back Their Faith” After Disappointing Election

A week after the election, the Huffington Post published a blog in which Progressive Christians suggested what like-minded Christians should do in order to “take back their faith.”

The responses were predictably representative of left-wing Christianity, which centered on re-emphasizing social justice issues and identity politics as the “loving,” compassionate, anti-Trumpian counterpart to the hate-filled Christianity of the right. Also predictably representative was the tone of unearned moral superiority in the responses of the progressive Christians interviewed- and progressive Christians in general.

We’re about to witness firsthand what happens when the established Church compromises its moral authority and sells out the marginalized ― refugees, immigrants, religious and ethnic minorities, sexual assault survivors, the sick and those with disabilities, and LGBT people ― for the promise of power. It won’t be pretty.”

“Maybe what’s happening is progressive people of faith are finding ways to connect around our shared beliefs that all people are children of God … All of those people are joining together right now, we’re… plotting and planning how to resist together… to me is a new religion, the new Christianity.”

Jim Wallis, the founder of Sojourners and author of America’s Original Sin, claimed, “White Christians voted just like white people in America did, and being Christian didn’t matter much. So how do we teach white Christians, white evangelicals to be more Christian than white? That’s the issue going forward.”

Wallis- reflecting on Jesus’ counsel regarding the relationship between treating a ‘stranger’ and treating Jesus, suggested that pastors allow their churches to become sanctuaries to protect illegal aliens from deportation.

To an extent, there’s some truth about the concerns of progressive Christians. Corey’s observation regarding evangelicals having become too cozy with political power, which has muted the volume, consistency, and effectiveness of their prophetic political witness, is a legitimate concern.

But where’s the moral balance and condemnation of progressive Christians for having done the same? What about Episcopalians, Presbyterians (USA), a segment of Methodists, and other left-leaning Christians who’re guilty of preferring political power and cultural cache to the Christian gospel. Whether one agrees or disagrees, at least conservative evangelicals can be praised for attempting to clarify- or redeem- what it means to be an evangelical and have a responsible and biblically articulate political witness in the age of Donald Trump.

Moreover, why doesn’t the Christian Left (or Right) consistently condemn black Christians and black churches for sacrificing Christian principles in favor of political expediency and influence via an unholy marriage to Leftism and socially progressive causes? This shifting standard of morality is but one issue that persistently undermines the Christian Left’s political witness.

However, there’s little truth to Evans’ suggestion that evangelicals who voted for Trump sold out “marginalized” groups for political power. How is she in a position to know the minds, hearts or reasoned intentions of voters who sided with Donald Trump? The charge is not only silly but it isn’t true. It’s meant to dismiss as evil her fellow (white) Christians by projecting a social pox (sexist, racist, xenophobic, homophobic, etc.) upon those who voted against her preferred candidate. Framing it in a simple moral dichotomy that dismisses nuance, and that divorces Christian support for Trump from caring about “marginalized” groups allows Evans and her sympathizers to claim a superficial unmerited moral purity to dismiss everyone who disagrees with them as not only wrong but immoral.

Voting for Trump, directly or indirectly, doesn’t mean the voter is against “marginalized” people and Evans knows this.

The same goes for Lewis’ virtue-signaling bravery as a social justice warrior. All of the sacralized issues she raised are supported or defended without Christian influence every day, so what distinguishes her intentions, purportedly Christian, as being important or necessary? Her ‘new Christianity’ accommodates one-dimensional social identities that compete with the identity that’s required to be grounded in Christ. Lewis should be mindful of Paul’s admonition about teaching a ‘new’ gospel that differs from the one positioned in Christ.

The gospel of progressive Christians is increasingly more about the gospel of Leftism than the Gospel of Christ. Specifically, this social gospel- or social virtue- is really about disassociating oneself, or one’s group, from that which supposedly threatens the common good- what the in-group consensus simplistically defines as a myriad of trendy ‘evils’. It allows the separated to pretentiously claim a false sense of moral superiority over those who reject their definitions and moral claims.

Astute observers realize that this is more about being properly positioned and seen as against manufactured evils- how “moral” and “religious” they look to other like-minded people choosing ‘love’ over ‘hate’- rather than genuine concern for the people/groups these “evils,” it’s claimed, negatively effect.

It’s self-congratulatory virtue vanity, it’s empty, and it violates Jesus’ admonition against practicing one’s righteousness before men instead of calling those they claim to represent to a higher standard of living as disciples of Christ.

This practice of synthesizing identity politics with Christianity is dangerous because of the popular and cultural influence afforded to the Christian Left.

If progressive Christians are concerned about the future of their faith, they may want to consider what faith is really of concern- Leftism or Christianity.