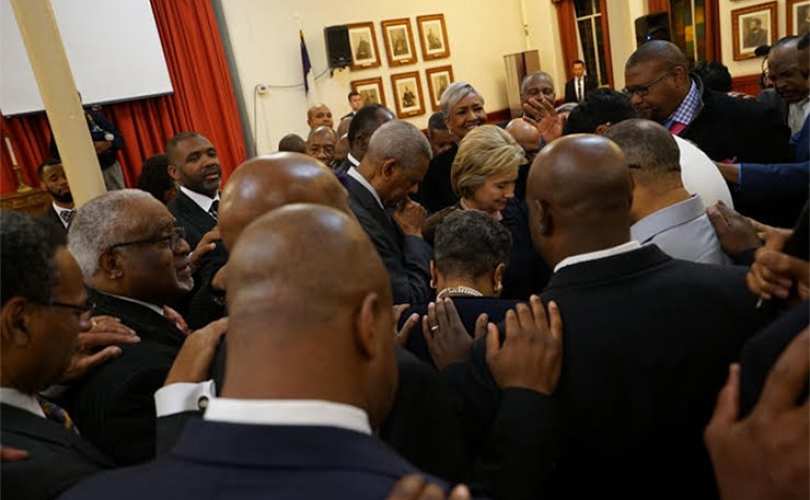 A group of black clergy members recently delivered a letter to Hillary Clinton’s campaign headquarters in Brooklyn that expressed concern and frustration on several key social and economic issues.

Anticipating her win against Donald Trump, the open letter expressed their anxiety about how Clinton’s administration might address issues central to black Americans- high rates of abortion, the restriction of religious liberty, the increase of police brutality, and the lack of quality education and economic opportunities in black society.

The 25 signatories, self-identified Democrats and “Independents,” reminded Clinton of the importance of the black vote and insisted Clinton not ignore the “69,000 black churches in the US.” They also demanded that Clinton “accord the Black Church the same respect that would be conferred on wealthy white donors.” The black faith leaders concluded the letter by requesting a meeting with her during her first 100 days in office to discuss these and other issues in more detail.

As representatives of the black church, the signatories should be commended for highlighting several important issues complicating the quality of life for too many black Americans.

However, this letter was counterproductive. Black clerics shouldn’t waste time persuading another Democrat politician to take black concerns seriously. My criticism isn’t of these black religious leaders but of the outsourcing of black responsibility and the preoccupation with the government to solve the crises in black society.

This appeal is a waste of time if the cosigners plan to vote- or have already voted- for Hillary Clinton. They know who she is and what she’s about. Voting for her (and her party) contributes to the problems they want to be solved, compromising their integrity.

Moreover, there’s no way in this world- or the next- that Hillary Clinton or any Democrat will elevate the needs and concerns of black people with “white donors.” I get it- this was an attempt by black faith leaders to force Clinton into validating the existence of racial equality among Democrats. The problem is the Democrats form the party of racial inequality and various other forms of disparity.

Further- and evident to everyone, Democrats have deliberately taken the black vote for granted since black folk decided en masse to compliantly throw away their votes to the Democrats while asking for nothing respectable in return for their faithfulness.

Blacks have neither the financial nor political capital to demand they be considered equal to white donors (or any other demographic), let alone taken seriously when they do. Black voters haven’t earned that kind of respect. As a matter of fact, as a near-monolithic voting block, blacks don’t have the political respect of anyone save themselves.

One party sees no obligation to earn black votes but still receives them; the other party observes black culpability in being snubbed and its apparent acceptability and doesn’t see a reason to bother. The letter’s lament about both political parties being indifferent to black problems is true, but it’s the fault of blacks alone.

More to the point, black religious leaders shouldn’t petition and plead with politicians to resolve black social and moral pathologies that local churches in their respective communities can and must be primarily challenged. And to be specific, the majority of the issues raised in this correspondence are moral problems.

The message’s full-throated condemnation of the devastating effects of abortion on black communities is spot-on. Describing the catastrophic impact of abortion in black communities and the disproportionate rates at which black women have abortions, the letter notes, “Blacks account for roughly 38% of all abortions in the country though we represent only 13% of the population.” That’s racial extermination.

The letter also affirms that because people are “created in God’s image,” innocent human life deserves protection against the “deliberate destruction… in its most vulnerable state.”

Yet the cosigners questioned Clinton (and the inquiry has to be rhetorical considering the topic and whom they’re addressing) as to what her administration will do to mitigate the high numbers of black abortions. Hillary Clinton received an award named after racial eugenicist Margret Sanger- whom she claimed she “admires” and is an enthusiastic supporter of abortion up to the point of birth. Her devotion to abortion is religious. She isn’t changing.

Ecclesiastical church members are much better suited to confront abortion because it’s a moral problem and their proximity to the problem. The women having these abortions are members of their local churches and religious institutions. Nothing forces blacks into sexual irresponsibility or to kill their children indiscriminately. The problem and solution of reducing high abortion rates come down to black responsibility and moral redemption, which starts with local church leaders flatly denouncing sexually-destructive behaviors- including using abortion as birth control- and encouraging productive ones, not government intervention.

The same goes for the disproportionately high black crime rates that encourage police presence in black neighborhoods. The delegates of black Christianity are correct in bringing attention to black criminality and delinquency- the “calamity,” as they call it. Still, they sought action and resolution from the wrong person, the wrong party, and the wrong vehicle.

Though effective policing and commensurate sentencing for criminality are needed, unless and until black people and black churches are deliberate and relentless in rebuking the plague of black hoodlums that are hell-bent on death and devastation, more blacks- including the innocent- will suffer the predictable consequences. The black church- and blacks in general- must reject the tradition of silence regarding this issue. Black silence condones the very community-destroying behaviors that these black Christian ambassadors are spotlighting.

Additionally, if blacks want to reduce the occurrences of lethal police encounters, black churches, and community members must vociferously repudiate the thoughts and attitudes that cultivate black cultural disorders and criminal stereotypes that draw the eye and ire of law enforcement. Black churches would do well in reviving and emphasizing a religious temperament that includes family stability, fatherhood, self-respect, personal responsibility, respect for authority, and the love of self and neighbor to minimize black criminality and tension-filled police responses. Black churches need to maximize the gospel and other resources instrumental in changing lives and overcoming the negative aspects of black culture.

Blacks must control the things that are within our power to prevent. We must stop preserving the posture of weakness and helplessness and depend on politics to save us. Salvation is from God, not the government.

Finally, the letter’s uncertainties regarding the future of religious expression during a Clinton administration are sound. The “open contempt for religious freedom” exhibited by LGBT autocrats toward Christians who disagree with “[normalizing] immoral sexual behavior” should concern everyone. Though there’s the argument that the black church didn’t speak up sooner and louder regarding the homosexual revolution, I salute these faith leaders for rejecting the scheme of gay activists to appropriate the narrative and legacy of the black civil rights movement to regularize homosexuality, and for their willingness “for the sake of the gospel, to suffer the consequences” in maintaining faithfulness to biblical convictions.

But Democrats facilitated the cultural legitimization of radical homosexuality and ignored constitutional safeguards of religious freedom; recent history proves it.

It bears repeating. The issues raised by these black church leaders are significant. More blacks must honestly confront what’s destroying black society, painful as it is. We must honestly identify the defeatism in black culture and confess that we’re sabotaging ourselves. We must reclaim the kind of self-determination, self-empowerment, and dignity our predecessors embraced.

People will resume taking us seriously only when we’ve proven that we take ourselves seriously.