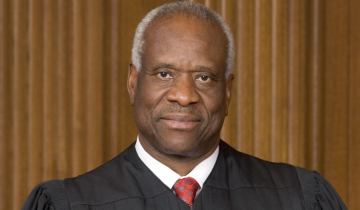 On September 24th, 2016, the National Museum of African-American History and Culture opened to the public- the only national museum exclusively devoted to documenting the life, history, and culture of black Americans. According to the museum’s website, the newest museum of the Smithsonian Institute contains close to 40,000 artifacts chronicling black culture, and features hundreds of contributions by black Americans to American history.

A noteworthy absence, or more specifically, omission, from the varied list of decorated black Americans the museum spotlights is United States Supreme Court Justice, Clarence Thomas. The museum’s only reference to Justice Clarence Thomas is found in a video of Anita Hill, who testified against him during his Senate confirmation hearing.

When asked about the snub, the museum’s spokeswoman Linda St. Thomas explained that, “There are many compelling personal stories about African Americans who have become successful in various fields, and, obviously, Associate Justice Thomas is one of them. However, we cannot tell every story in our inaugural exhibitions.”

One would think that Clarence Thomas- the second black American to preside on the highest court in the country- would be prominently featured in a national museum explicitly dedicated to showcasing black achievement and black history.

More to the point, Justice Thomas is in rarified air particularly because he’s only the second black to be nominated and confirmed to the very court that not only once ruled that blacks weren’t protected by the Constitution and thereby unable to petition the court to recognize their freedom (Dred Scot)- but that also upheld the constitutionality of segregation- politically justifying the continuation of the legal but immoral doctrine of “separate but equal,” prolonging the idea of blacks as second-class citizens (Plessy v. Ferguson). The symbolism alone is worthy of acknowledgement and admiration.

On the other hand, Thurgood Marshall- the other black American to serve on the Supreme Court is featured as a result of his legal work with the NAACP- especially on the 1954 case, Brown vs. Topeka Board of Education, which initiated the modern black civil rights movement.

Another likely reason Thurgood Marshall is featured- he was a Democrat.

Thomas’ omission is even more appalling when one considers that various rappers including the late Eazy-E, a former drug dealer who died of AIDS; the late felon Tupac Shakur (killed in a drive-by shooting in Las Vegas, Nevada), and accused child molester Afrika Bambaataa are featured.

The excuse given by Linda St. Thomas isn’t fooling anyone. The gallery’s decision to intentionally exclude Clarence Thomas from its archives was entirely political. Clarence Thomas is a black conservative, and the Left despises freethinking blacks who reject the hopeless narrative that black life is controlled and determined by white racism.

Moreover, Leftists continue to loathe Clarence Thomas because he courageously and successfully endured the reprehensible attempt to unfairly disparage his character. During his confirmation hearing, Thomas directly condemned the despicable actions allowed by the Senate committee, calling it a “circus,” a “national disgrace” (which it was), and a “high tech lynching” of “uppity blacks” who reject the monolithic, socio-political groupthink embraced by- and to the detriment of- far too many black Americans.

In addition, Thomas’ exclusion from the National Museum of African American History and Culture is principally a disservice to black children. Not only does it disregard a meaningful triumph in black history, it robs black children of an educational opportunity to experience an alternative worldview- the absence of which reinforces the hopelessness and defeatism that accompanies the belief in the omnipotence of racism.

With black cultural dysfunction being ubiquitous, black children deserve to know that they don’t have to be defined by the circumstances of their birth, but by their accomplishments, despite the circumstances. Clarence Thomas overcame poverty and racial discrimination. He took education seriously and through hard work and perseverance earned a place on the Supreme Court, a position he’s held for 25 years.

Shame on the National Museum of African-American History and Culture for its inexcusable decision to ignore Clarence Thomas. More black children need to know who Clarence Thomas is for the right reasons, not ignored for ideological ones.