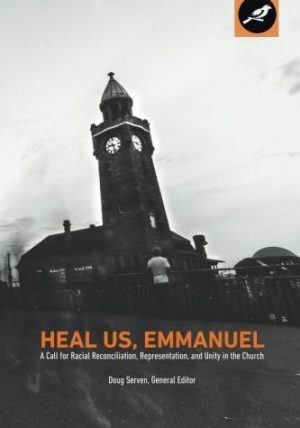 Review: Heal Us, Emmanuel: A Call for Racial Reconciliation, Representation, and Unity in the Church

Racial discrimination and racial injustice are predictably tense topics and sensitive areas of public discussion. During the past eight years particularly, attempting to frankly examine these subjects has become even more of a fragile and unproductive endeavor that has curtailed open and honest dialogue in favor of racial monologues that have increased racial resentment and hostility. The product of marginalizing a variety of serious and authentic voices on racial issues has suppressed what could be productive, diverse and candid discussions, which would lead to actual approaches to mitigate racial discrimination where it actually exists.

Though the multiplicity of responsible voices willing and able to faithfully analyze and address such tenuous topics are relegated to the margins in society at large, these voices are also seemingly silenced in the one place they shouldn’t be – the American church. Many Christians have increasingly and repeatedly acknowledged the church’s ostensible absence or silence on such important issues. These observers lament the church’s lack of leadership and action in being the model for racial reconciliation and unity the country desperately needs.

Many of the Christians concerned by the church’s reluctance and inactivity to genuinely confront the race issue are found in the book,Heal Us, Emmanuel: A Call for Racial reconciliation, Representation and Unity in the Church.

Heal Us, Emmanuel is an assorted collection of 30 essays from 30 different authors, all of which are pastors or elders in the Presbyterian Church of America (PCA). The introduction informs the reader that the majority of the contributors are white and theologically conservative, though there are contributions from black, Latino and Asian Americans – also members of Presbyterian Church leadership – who share similar perspectives concerning racial problems in the PCA. The narratives, in their unique way, detail how blindness to racial issues for some and an increased racial consciousness for others have influenced their personal lives and the context of their respective ministries. The goal of Heal Us, Emmanuel, is to initiate the process of racial reconciliation and unity within the church, starting with biblical confession, repentance and Christ-like forgiveness.

The narratives in the book are methodically portioned into six sections, with each section bearing a corresponding theme that reflects the systematic emphasis of the book as a whole. The six- step procedural is as follows:

This six-part narrative is a map that guides and informs the reader of the practical, religious and theological consequences of Christians genuinely confronting the implications of submitting to the gospel’s directive of eliminating barriers of racial resentment and ethnic hostility. Engaging in the difficult and uncomfortable task of interracial healing and racial reconciliation potentially achieves what one author called, redemptive unity.

Though the personal story lines about racialized experiences come from self-identified Presbyterians contextually anchored in the PCA, I think much of what was expressed is representative of the American church as a whole.  Truthfully, my experience guides my belief that the American church hasn’t approached the issue of multi-ethnic unity and interracial reconciliation with the seriousness and urgency it deserves. Increasingly I’m of the opinion that many American churches have little interest in challenging the discordant issues of race and reconciliation. True, as chapter three intends, the subject of race is sometimes omitted, in part, because being in the dominant class means not having to experience the prospective pain, hurt and frustration of racial discrimination. The omission is unintentional. Not having an expectation of encountering racism means not having to prepare or react in defensive or emotionally protective ways. In other words, out of sight, out of mind.

On the other hand, omission can be commission. As one author notes about Presbyterians (104-114) (which again can be applied to the American church overall), excluding blacks is deliberate. Historically, this exclusion can be traced to slavery when blacks were forced to create separate racial denominations that allowed them to fully participate in worship; through Jim Crow and the civil rights era when white churches compromised the integrity of the gospel, and their public Christian witness by consistently staying silent with respect to the evils of segregation and the suffering of their black brothers and sisters in Christ (120).

Presently, if and when the church apprehensively attempts to address the topic, the enterprise isn’t as effective as it can be, I believe, because the modus operandi of the American church is replicating the failed and inadequate “racial justice” agendas of our culture rather than employing a gospel-centered approach that integrates love, forgiveness, repentance and acceptance on the path toward (re)conciliation (theological unity, 183). One author referred to the socially acceptable pattern of considering black people, and confronting issues of racism while judging “progress” by socioeconomic, quality-of-life factors, as an ineffective “political mindset” that under-emphasizes the gospel and achieving redemptive ethnic unity (3-9). The “political mindset” that perceives social and economic parity or black advancement prefers a “better America” than God’s kingdom and gospel based on interracial Christian unity (3-7).

The relative lack of attentiveness, apprehension and reluctance of the church to faithfully address issues of race, repentance, and reconciliation serves to preserve the racial discontentment that includes both the church and culture. The church’s absence and perceived indifference to racial unity allows lesser quality movements, and agendas, that nurture racial grievance and discord to fill the void.Heal Us, Emmanuel is a conversation starter in this regard because it encourages white Christians to own and confess the sin of racism. The book also encourages white Christians to commit to theologically influencing systems and structures in churches and denominations (and society) that leads to redemption, reconciliation and unity in the body of Christ.

And that’s the rub. This book can’t just encourage people to start a conversation or continue a dialogue. Talk doesn’t equal action; it should necessarily lead to it.

Heal Us Emmanuel is worth the time. It read as a sincere attempt of now self-aware white Christians to acknowledge the evils and consequences of racism in both American church and American culture. The book is admittedly unidirectional, primarily dealing with the obligations of white Christians to resolve the problem of race. That resolution shouldn’t include admitting that behaviors and thoughts are “racist” when they aren’t. Nor should it include social or religious genuflecting when and where it isn’t needed, which I felt some of the essays rhetorically reflected. I think these actions, the result of white guilt, complicate the tasks of healing and unity.

Nevertheless, Heal Us, Emmanuel is an honest and needed contribution in pushing the American church toward its responsibility in shaping a gospel-based strategy of racial healing and unity.