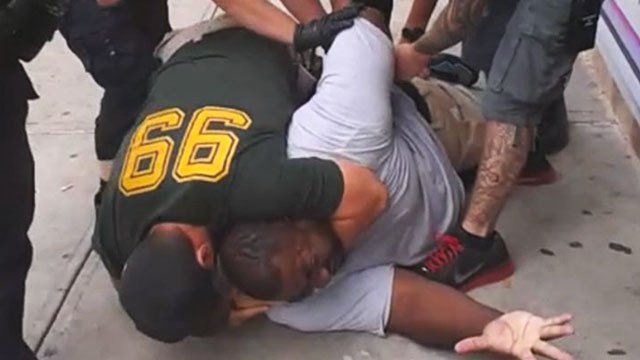 No Charges For NYPD-Involved Choking of Eric Garner

The NYPD officer who was caught on video applying what many saw as an “illegal” or an “excessive” chokehold that caused the death of Eric Garner, will not be charged with his death.

A Staten Island grand jury dismissed all charges against Officer Daniel Pantaleo, meaning he won’t face indictment for the death of Garner.

“The blockbuster decision capped weeks of investigation by the special grand jury, which was empaneled in September specifically to review evidence in Garner’s racially charged death.

It was unclear exactly what charges prosecutors asked the grand jury to consider filing, or how the vote went.

Under New York law, an indictment must be agreed upon by at least 12 members of a grand jury, which can have up to 23 members.”

Cellphone video captured the officer-involved altercation with Garner which began after he was confronted for illegally selling cigarettes.  In the video, you can see and hear Garner pleading with the officers saying he couldn’t breathe as the officers restrained and cuffed him.

Garner’s death was ruled a homicide by the Medical Examiner’s Office, saying he died from a “compression of neck (chokehold), compression of chest and prone positioning during physical restraint by police.”

Other reports are saying that Garner suffered a heart attack.

Garner’s family has filed a $75 million wrongful death suit against the city of New York, and none other than Al Sharpton is a Garner-family advisor.

This will surely add more ammunition to the demagogued narrative that racist, out-of-control cops are preying on innocent black men, fueling the “black lives matter” mentality.  I will say- this case, rather than the Michael brown case, is much more disturbing and qualifying of restrained outrage regarding how police apprehend and restrain offenders- regardless of their color.

That said, because of the intentionally-inflamed rhetoric that we’ve heard over the past several months where racial agitators and defenders of Michael Brown elevated him to being a martyr and canonized him as a saint, a significant amount of moral authority regarding questionable officer involvement with blacks has been forfeited. Though I still believe that the issue of black criminality- largely at the expense of black victims- is much more of a pressing concern that warrants more focus than confrontations between police officers and (potential) black offenders, this present case is much more favorable to the so-called ‘black lives matter’ social campaign.

Because the grievance industries (aided by media outlets) intentionally inflamed tensions, intentionally ignored and disregarded evidence in the Brown case that clearly demonstrated Brown’s actions contributed to his own death- in addition to repeating and gesturing, the ‘hands up, don’t shoot’ fairy tale, the hearts and minds of many Americans might be closed to the potentially legitimate cries of injustice this time around.

That’s why we’re taught from an early age never to cry wolf.

Though it is sad that Eric Garner lost his life, the reality is had he- and Michael Brown- not resisted arrest (Garner yelled ‘this stops today’ when officers approached), both men would be alive today. That’s the narrative that needs more attention: don’t resist arrest; live to talk about it.