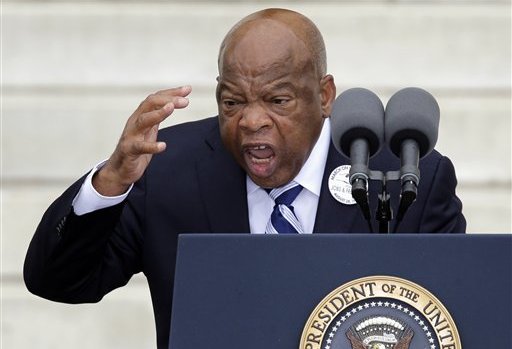 On a recent episode of the Roland Martin radio show, Representative John Lewis (D-GA) took Martin’s bait and irresponsibly compared the shooting of blacks by police officers- including Michael Brown- a “modern-day Selma.”

Think about that. Blacks being shot by police officers are equated with the March to Selma, Alabama in 1963.

For far too many blacks, it will always be the 1960’s. No matter how much visible and overtly obvious progress the country has made in overcoming racial discrimination, in the minds of still too many blacks, we still haven’t “overcome.”

And in reality, the fact that every incident involving race- no matter how peripherally- is intentionally and desperately compared with past incidents like Selma, actually proves how much of a non-factor systematic racism is in today’s America.

Back to the racial instigator- the ‘civil rights icon’, John Lewis.

“Selma was the turning point. And I think what happened in Ferguson will be the turning point. I think people are waiting, they’re watching, and we’re gonna see within the next few days what’s going to happen — and that would be massive, nonviolent protests all over America. When we were beaten on that bridge in Selma, people couldn’t take it, for they saw it, they heard about it, they read about it, and it lit a sense of righteous indignation. When we see a miscarriage of justice in Ferguson, they’re going to have the same reaction they had towards Selma.”

First- to say this is to suggest that Michael Brown was innocent. The information released and leaked so far indicates that Brown wasn’t the gentle giant his family and the media claimed he was, nor was Brown out “spreading the word of Jesus Christ”- a lie his cousin offered up at Brown’s funeral.

Based on the same leaked information, Michael Brown was culpable in his own death. Further- is Lewis calling for officer Darren Wilson’s indictment even if the evidence demonstrates Wilson’s innocence? Where’s the justice in that?

Were the protestors who marched in Selma, Alabama for voting rights the moral equivalent of Brown stealing a box of cigarillos and attacking a police officer?

Were those who peacefully marched across the Edmund Pettus Bridge the moral equivalent to the “peaceful demonstrators” who’ve looted, damaged businesses and organized chaos in Ferguson Missouri?

Is Bloody Sunday the moral equivalent to the criminal disobedience the country has witnessed in Ferguson since August?

It’s clear that the statements of John Lewis- emblematic of the average ‘hands up don’t shoot,’ Michael Brown supporter- isn’t concerned about justice. He- along with every other person who’s emotionally involved in this case already has his or her minds made up. The narrative of ‘racist cop shoots innocent, unarmed back teen’ as proof of unending white racism can’t- and won’t- be pierced, regardless of what evidence to the contrary the grand jury reveals.

With all due respect to John Lewis and what he experienced during the actual march to Selma-including a severe head wound, engaging in emotional manipulation by racially inciting the black residents of Ferguson discredits what he and many others personally witnessed in Selma. With statements as reprehensible as these, he trivializes what Selma marchers experienced on Bloody Sunday while giving credibility to the self-destructive, anti-social behaviors of Ferguson protestors.