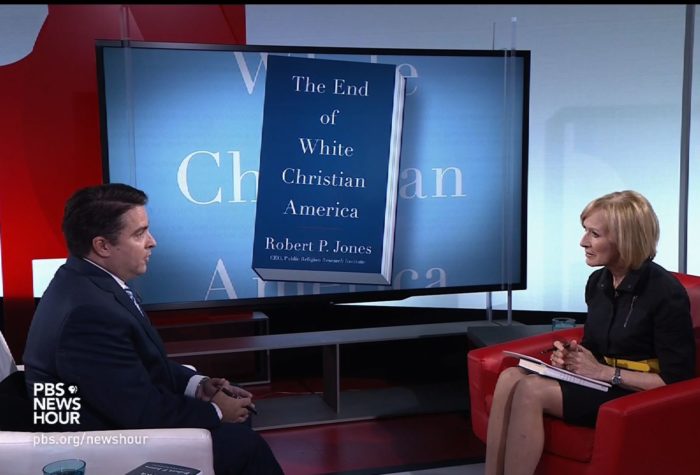 According to Robert P. Jones, the founder and CEO of the Public Religion Research Institute (PRRI), White Christian America- “the most prominent cultural force in the nation’s history”- is dead.

Jones’ new book, The End of White Christian America, which narrates the historical development and decline of this religious and national phenomenon, functions not only as a eulogy for the once prominent majority but also the obituary of what he refers to as White Christian America. Though the exact time and date of death is somewhat uncertain- Jones speculates about 2004- the cause of death, according to Jones, is obvious. The factors that inevitably led to the demise of White Christian America included the changing racial/ethnic demographics, increasing religious disaffiliation among Americans- particularly younger Americans, and the inability of White Christianity to maintain relevance in a shifting cultural environment that welcomed and approved the redefinition of marriage to include homosexuals.

Who, then, is White Christian America?

According to Jones, White Christian America overwhelmingly consists of white Mainline Protestants and white Evangelicals. Jones argues that the political activity of Evangelicals in the latter part of the 20th century forced white Christian America to expand and integrate Catholics and Mormons into their tribe in hopes of expanding its political influence resulting from shared partisan expediency and potential socio-political objectives.

Historically, White Christian America traces its religious roots to northern Europe (30-31). In America, Jones chronicles three distinct waves of its cultural influence and growth: the Roaring 20s, World War II, and the political ascendancy of the Religious Right in the 70s and 80s (7). Though viewed as a whole, geography and theology distinguished one half of White Christian America from the other. The theologically liberal, mainline Protestants were headquartered in New England and upper Midwest while the more conservative evangelical Protestants were (and still are) entrenched in the South and lower Midwest (31).

The power and influence of White Christian America were seen not only among institutions that shaped and reflected its culture- The National Council of Churches, the National Association of Evangelicals, The Boy Scouts of America, the Girl Scouts, the Young Men’s Christian Association, denominational colleges and seminaries among others- it was demonstrated in the kind of architecture that defined both halves of this Protestant empire. Jones notes that the (mainline) United Methodist Building in Washington, D.C., the Interfaith Center in New York City, and the (evangelical) Crystal Cathedral in Garden Grove, California- reflected the respective cultural prominence of white Protestantism in its heyday.

Recounting the decline of White Christian America, Jones provides very good data from sound sources including the General Social Survey, American Values Atlas, the Pew Foundation, and data derived from Jones’ organization, PRRI. The gathered data suggest that religious plurality; ethnic plurality, the increasing decline in self-identified religiosity, and the graying of White Christian America all contributed to its decline. For instance, Jones highlights that 2008 was the last year on record in which Protestants, regardless of color, represented a majority (50). The estimated white Christian share of the 2016 electorate is only 55 percent and Jones predicts it will make up 52 percent of the electorate come 2020 (47).

Considering the decline of white Christian presence in the country and electorate, Jones contends the election of the country’s first black president was both a symbolic repudiation and conquest over the long dominance of this cultural force. The reaction to the first black president, argues Jones, resulted in the “politics of nostalgia” for White Christian America- specifically by evangelicals- anxiously or angrily pining for a time of recognizable religious and ethnic homogeneity (85). Though he doesn’t mention the current election cycle, one is immediately drawn to the “Make America Great Again” campaign slogan of Republican presidential hopeful, Donald Trump.

Has White Christian America lost its cultural and political influence? Unequivocally, Jones says yes. He notes the political strategy of marshaling and depending on white Christian voters- a successful plan of action for re-electing George W. Bush in 2004- is a losing political strategy going forward, resulting from the declining citizenry of White Christian America. Appealing to a wide berth of data, including the 2013 Growth and Opportunity Project commonly referred to as the “GOP Autopsy” report, Jones is certain that if the GOP wishes to remain politically competitive moving forward, it needs to abandon the once-dependable strategy of appealing only to white Christians (110).

Sociologically, the end of White Christian dominance precipitates a broader demographic change with social, cultural, political, and economic consequences. Even still, the book focuses on this phenomenological passing through a political and cultural lens and that shouldn’t be avoided or minimized. For example, a portion of Jones’ autopsy, as mentioned earlier, is focused on “gay marriage” and what “acceptance” means for White Christian America and its decline. Though he conflates “gay rights” (doesn’t define in detail) with “gay marriage,” Jones acknowledges that the agenda of homosexual activists was to directly challenge the religious and theological principles of White Christian America in pursuit of social acceptance and legalization of “marriage equality.” Further, Jones says that widespread acceptance and legalization of same sex marriage is additional evidence of the end of White Christian America’s cultural dominance. This is a bit concerning, as widespread acceptance of same sex marriage (more specifically, redefining marriage to include anyone) is a rejection of the orthodox Christian teaching and practice concerning marriage, regardless of color or ethnicity.

Jones’ claims that the refusal to bend to cultural trends and accept gay marriage (which he labels antigay) puts the evangelical portion of White Christian America at odds with younger Americans (132-137). There’s a subtle suggestion that evangelicals should follow their mainline brethren and bend or reject traditional Christian biblical and theological teaching on marriage as a strategy to broaden its appeal to younger Americans.

Lastly, Jones maintains that White Christian America has a race problem, evidenced both in the opposition to Barack Obama, and the reaction to cops killing “unarmed black males” (147-148), which he claims establishes a lack of sympathy for blacks and their feelings about blacks who’ve died in police interactions (155). As it pertains to the election of Barack Obama, there might have been some who held anti-black feelings that motivated and animated opposition to him. But, and what Jones doesn’t consider, is that some, if not much of the opposition to Obama, had little to do with his skin color and more to do with his progressive ideological beliefs that contradicted his professed Christian religious beliefs, and the traditional Christian beliefs of his detractors. To say that all or most white Christians who opposed Barack Obama did so because of racial animus, without evidence, disingenuously disparages a large group of people with a very little reflection.

Jones asserts that the reality of systemic racism and homogenized social segregation validates his claim that there’s no social institution positioned to resolve problems stemming from racial discrimination (156). For Jones, this is simply a continuation of the historical patterns of racial discrimination by white Christians- particularly by evangelical Protestants (Southern Baptists). Mainline Protestants are almost given a pass- congratulated for their contribution to social justice work both historically and presently (177-78).

Coming to terms with the end of White Christian America has come in phases. Jones acknowledges that the weakening influence of mainline Protestants has been occurring since the 60s and 70s, so mainline Christians have had more time to experience the stages of grief, denial, anger and acceptance (200), though there continue to be some holdouts. Jones seemingly scolds the Institute of Religion and Democracy (IRD) in its mission to hold the mainline denominations religiously and theologically accountable to orthodox teaching, almost condemning its persistence in its refusal to accept the consequences of demise of White Christian America (200-201).

Evangelicals are on a different timeline and are presently, though reluctantly, coming to terms with their diminishing authority and influence, which Jones claims is the source of the angered outbursts (the Tea Party, and one assumes, support for Donald Trump) in refusing to accept the inevitable.

One good thing about White Christian America’s declining political clout is that evangelicals can return to the biblical obligation of making Christian disciples, rather than trying to make political ones.

Yet there is some very noticeable but subdued cheerfulness by Jones for the end of White Christian America and one gets the sense that he’s not alone in his excitement. The celebration and joyfulness should be measured.

As White Christian America has lost its strength both in real numbers and in cultural, moral, and political influence, something predictably rises to fill the vacancy. What that “something” is, isn’t always predictable. In this case it very much is. The social values and “virtues” of Leftism, has replaced the space and institutions once dominated by White Christian America. As we’ve seen in the academy, where religion- particularly Christianity- has been shamed into public silence and private expression, the receding influence and presence of “white” Christian America has allowed the academy to degenerate into a moral gutter. The same is true regarding the debased nature of arts and entertainment, which have occupied spaces where Christianity served as a bulwark against its culturally corruptive influence. Is that a good thing, and if so, how and why?

No one, or at the very least, very few people maintain the idea that White Christian America was perfect. They missed the mark on some pretty important social issues because of their culturally homogenized, whitewashed, biblical hermeneutic. Despite Jones’ underlying tone, the values of White Christian America- specifically Judeo Christian values- provided a semblance of unity against the proven destructive nature of pluralism that lead to the many damaging effects of relativism.

Despite the not-so-subtle excitement for the culmination of Christian influence on American culture, the analyses provided by Jones makes The End of White Christian America worth reading.