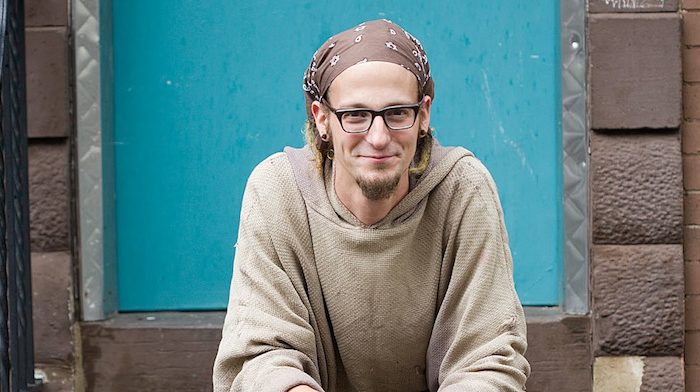 All Christians Should Support Capital Punishment

Shane Claiborne- a social justice activist, a progressive Christian who runs the Simple Way community in Philadelphia, and an author who published Executing Grace earlier this summer about the death penalty- was recently interviewed by Relevant Magazine about what he claims is the Christian obligation to reject capital punishment.

Claiborne seems sincere in his religious opposition to capital punishment but his reasoning (in this piece but also his book) to support abolition are in conflict with biblical justifications for the death penalty, and don’t make much sense.

“The consistent life ethic is beautiful. It says, “We are uncompromisingly going to stand for life.” The early Christians did that; they unilaterally spoke against violence in all forms. But what’s happened… pro-life has come just to mean anti-abortion… But it’s not the only life issue.

…The death penalty raises one of the most fundamental questions of our faith which is: Is any person beyond redemption? At the end of the day I think there are a lot of reasons to be against the death penalty, but for a Christian who believes that Jesus died to spare us from death and this idea of grace or as Scripture says “mercy triumphs over judgement.”

This is a bit convoluted and attempts to hide moral relativism posing as, but distorting, Christianity.

“Violence in all forms?” So murder, rape, and punishment for both are all morally equal and can be comparably defined as violence? How? Based in what functioning moral universe? The Bible and Christian orthodoxy are clear that gradations of violence, sin, and punishment exist precisely because of the morality attached to them.

The idea that one has to reject capital punishment to maintain pro-life ethical consistency is a false dichotomy, completely ignoring biblical teaching on the matter.

In my opinion- and based on the Bible, to be pro-capital punishment is to be pro-life.

It’s why the divine injunction of capital punishment (specifically related to intentional murder) is the only command repeated in each of the first five books of the Bible, beginning in Genesis 9:6, a universal proscription and application which predates the judicial and ceremonial laws of theocracy of ancient Israel. As such, this divine directive can’t be rationalized away as an injunction that was both historically and geographically explicit to the ancient Hebraic religious cultic practice.

So, why is supporting capital punishment equal to being prolife? The answer is found in the above scriptural passage: “Whoever sheds the blood of man, by man shall his blood be shed; for in the image of God has God made man.” This divine imperative foreshadows the language found in the Sixth Commandment of the Decalogue- “You shall not murder.” It’s precisely because we’re created in the image of God, that (premeditated) murder must be punished with this kind of required severity. Murdering a fellow human is a moral offense to God and must be treated and responded to as such.

Capital justice rightly roots out the evil in our midst, preserving the lives of the majority. It’s a tool properly used by the government to protect and defend human life, not a course of cheap vengeance. As stated earlier, all ‘violence’ isn’t the same because of the morality attached and required response to it. Those who commit the most grievous of crimes and worthy of the death penalty are killed, preventing them from re-committing their reprehensible acts, which violate the safety and security of other people.

Sparing the life of one worthy of capital punishment, for example a murderer, increases the chances that he or she will murder again. Are Christian abolitionists of the death penalty willing to see another innocent person murdered by someone that should’ve been put to death? Shane Claiborne and other Christian abolitionists of the death penalty never confront the real statistical possibility that by ‘executing grace’ to a condemned murderer allows him or her the ability to commit more violent acts and committing murder again- of another inmate or a correctional officer while imprisoned, or another civilian if/when they’re released from the penitentiary due to shortened sentences. I’m not sure the consciences of these Christian abolitionists of capital justice confront the reality that their “compassion” facilitates more murders of innocent people, and they’re obligated to explain how this unsound position and gamble can be characterized as compassionate.

Furthermore, Claiborne’s petition that no one is “beyond redemption” doesn’t factor in the dispute against capital punishment. The argument is that no person- regardless of the moral depravity evidenced in the actions s/he’s committed- is beyond repentance, spiritual conversion and redemption. As such, a person shouldn’t be condemned to death via capital punishment, but should be spared and given opportunities to be spiritually rehabilitated and saved.

Unfortunately, there are some people who’re simply beyond spiritual repair. History is chockfull of examples of people who committed atrocities against others who never repented of their evil acts. History also testifies that many people sentenced to prison for a determined length of time- up to life in prison- didn’t express remorse or realize spiritual restoration.

The redemption of the felon on death row is between the felon and God. It’s up to God to have mercy on him/her; we on the other hand, have to do what’s right and necessary for the preservation of civil society by protecting the innocent and punishing the guilty.  Sparing the condemned doesn’t do that. It sends exactly the wrong message about life’s sacrosanctity to other violent criminals that have yet to be brought to justice. Abolishing the death penalty shows preferential treatment for the murderer at the expense of the murdered. Again, how is this grace or compassion?

Even still, the “beyond redemption” appeal by Christians as a religious protest misses a couple key points.

God works on his time- not ours. The potential of the condemned being redeemed isn’t predicated on his exemption from capital punishment- as if God needs as much time as possible to transform and save the lost.

What if the guilty rejects redemption? Life imprisonment, rather than death for the possibility of redemption is a huge moral gamble that doesn’t make sense.

Since the time-sensitive potentiality of the condemned being redeemed is considered, why isn’t the alternative? Rather than giving both God and the condemned inmate ample time to get to know each other, why don’t Christian opponents of capital punishment contemplate the prospect that the spiritual conversion of death row inmates might increase if the death penalty was more efficient and accelerated? Increasing the urgency of death could prompt a change of heart that 30 years on death row won’t.

To the point, being spiritually redeemed doesn’t revoke earthly punishment.

“Today, black people are about 13 percent of the overall population, but they’re 34 percent of executions and 43 percent of death row.

We like to say it’s about the most heinous crimes, but really the biggest determinants in capital punishment are the race of the victim and the resources of the defendant.”

This is dishonest and Claiborne either knows it, or at the very least, he’s exceedingly naïve.

Claiborne completely ignores the severity of the crime(s) committed- the reason(s) why a person is on death row- and implies that the disproportionate numbers of blacks on death row and their executions are primarily the result of racial and economic factors, not (im)moral ones. Christians who share this position of disparate impact completely ignore or excuse the violent acts committed by black felons deserving of the death penalty, which are readily available from the FBI or the Bureau of Justice Statistics/Department of Justice.

Absolving blacks from moral standards and expectations that everyone else is subjected to might qualify as “compassion” or “justice” in the morally ostensible world of social justice activists. In the real world of cause and consequence, the majority of people on death row are there as punishment deserving of the crimes they’ve committed. If Claiborne is concerned about the disparate impact of capital punishment on black lives, he should instead focus on highlighting and condemning the contributing factors that facilitate the disproportional participation of blacks in violent criminality- the causative factor(s), which qualifies black felons for the death penalty.

Extending leniency to villains as compensation for their evil guarantees the actions of evil- including murder- will increase.

Sparing the life of the murderer doesn’t demonstrate compassion; it devalues it.

Of course, Claiborne and other Christian abolitionists argue that the ministry of Jesus in the New Testament has vacated the Old Testament moral and legal prescriptions for capital punishment. But this is a form of theological and biblical service buffet- simply taking away what one likes and ignoring what one doesn’t so as to reinforce one’s ideological predeterminations.

Despite arguments to the contrary, Jesus didn’t annul capital punishment in his Sermon on the Mount. During his Sermon in Matthew 5, Jesus says,

“You have heard it said, ‘An eye for eye, and a tooth for a tooth.’ But I tell you, do not resist an evil person. If anyone slaps you on the right cheek, turn to them the other cheek also.”

How exactly is this nullification against the divine command of killing a murderer? Clearly, Jesus is referring back to the Levitical law of proportionality (Ex. 21:24, Lev. 24:19-21a), meaning that punishments should fit the crimes committed rather than exceeding them. Jesus’ teaching in the Sermon isn’t rescinding the command to punish murderers by death. Rather, he’s teaching his listeners- first century commoners and other marginalized groups- how to respond to insults and offenses in interpersonal relationships. This subversive teaching regarding self-control instead of retaliation in the face of public humiliation had nothing to do with government, governmental authority or how government was to administer punishment.

Aside from misinterpreting and misapplying Jesus’ teaching from the Sermon on the Mount as an argument in favor of abolishing the death penalty, Christian opponents of the death penalty ignore or misinterpret Romans 13:1-5. Here Paul says that the government, being a servant of God, doesn’t bear the sword in vain. Rather, it rightly punishes criminals for committing evil. The Greek word for sword combined with the implication of the passage makes clear that Paul was indeed saying that civil government has a responsibility to protect its constituents, which included punishing by death those who commit evil, violence and threaten public safety.

A moral society that values life is duty bound to protect its citizens. It also has a moral obligation to prove the high value of life by punishing those who intentionally and without reservation, devalue it. In my opinion, contemporary Christian abolitionists of capital punishment undermine the sacredness of life by “compassionately” regarding murderers at the expense of the murdered, and future murderers at the expense of the future victims of murder. By seeking to end of the death penalty, they’re surrendering their responsibility to defend and maintain the inimitable value of human life using the pro-life teachings of Christianity to defend a pro-death position.

Capital punishment is a touchy subject and good arguments can be made to support both sides of the debate. But many of the arguments advanced by Claiborne- in addition to Pope Francis (here and here) and other Christian opponents of the death penalty, thus far, aren’t good arguments and they contradict and undermine the Bible in the process.