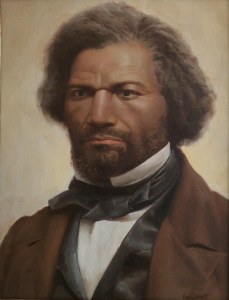 Letter From Frederick Douglass To His Former Master, Thomas Auld

The following is a letter written by Frederick Douglass to Thomas Auld, Douglass’ former slave master. In the letter, Douglass thanks Auld for freeing the remainder of his slaves (the actions of which are predicated on a letter that Douglass sent Auld the previous year admonishing him to do so).  Rather than being consumed with hatred, anger and resentment toward his former master, Douglass chose to express Christian love and edification through forgiveness and reconciliation.

Now if Douglass– a man who suffered under the trials and unthinkable tribulations of slavery can forgive the one responsible for such sufferings, why can’t blacks today do the same of people who are guilty of far less?  Douglass’ actions in regard to his former slave owner is a template for a ministry of reconciliation– racial or otherwise.

Blacks today should and must follow Douglass’ example, and initiate forgiveness and reconciliation toward whites (and all others).  Blacks are in a prime position not only to offer forgiveness to those who may be guilty of racial discrimination, but to sincerely and humbly ask for forgiveness from those who have been unfairly and dishonestly accused of racism.  In doing so, blacks– in word and in deed– acknowledge that in Christ, the wall of hostility and division has been destroyed (Eph. 2: 14) and as such, we are all free in the multiethnic family of God (Gal. 3:28).

I propose to celebrate this, the 11th anniversary of my escape from your dominion, by addressing to you a friendly epistle on the subject of slavery.

I do this partly with a view to the fulfilment [sic] of a promise I made you on this day one year ago, and partly to neutralize certain charges which I then brought against you.

Ungrateful and unjust as you, perhaps, deem me, I should despise myself if I could wilfully [sic] malign the character even of a slaveholder; and if, at any time, I have appeared to you guilty of such conduct, you have greatly misapprehended me. I can say, with a clear conscience, in all that I have ever written or spoken respecting yourself, I have tried to remember that, though I am beyond your power and control, I am still accountable to our common Father and Judge, in the sight of whom I believe that I stand acquitted of all intentional misrepresentation against you. Of course, I said many hard things respecting yourself; but all has been based upon what I knew of you at the time I was a slave in your family. Of the past, therefore, I have nothing to take back; but information concerning you and your household, lately received, makes it unjust and unkind for me to continue the style of remark, in regard to your character, which I primarily adopted.

I have been told by a person intimately acquainted with your affairs, and upon whose word I can rely, that you have ceased to be a slaveholder, and have emancipated all your slaves, except my poor old grandmother, who is now too old to sustain herself in freedom; and that you have taken her from the desolate hut in which she formerly lived, into your own kitchen, and are providing for her in a manner becoming a man and a Christian.

This, sir, is good news; it is all the more gratifying to me, since it deprives the pro-slavery public of the North of what they deem a powerful argument against me, and the abolitionists generally. It proves that the agitation of the subject of slavery does not hinder, if it does not help, the emancipation of slaves at the South. I have been frequently told that my course would have an unfavorable influence upon the condition of my friends and relatives in your possession; and the common argument against abolitionists may be stated as follows: Let slaveholders alone, and they will emancipate their slaves; and that agitation only retards the progress of the slave’s liberation. It is alleged that the slaveholder is induced to clutch more firmly what is attempted to be wrested from him. To this argument, your case is a plain contradiction. If the effect of anti-slavery were such as is thus alleged, you would have been among the first to have experienced it; for few slaveholders in this land have had a larger share of public exposure and denunciation than yourself; and this, too, from a quarter most calculated to annoy, and to provoke resentment. All this, however, has not prevented you from nobly discharging the high duty you owed alike to God and to the slaves in your possession. I congratulate you warmly, and I rejoice most sincerely, that you have been able, against all the suggestions of self-interest, of pride, and of love of power, to perform this act of pure justice and humanity. It has greatly increased my faith in man, and in the latent virtue even of slaveholders. I say latent virtue, not because I think slaveholders are worse than all other men, but because, such are the power and influence of education and habit upon even the best constituted minds, that they paralyze and disorder, if not destroy their moral energy; and of all persons in the world, slaveholders are in the most unfavorable position for retaining their power. It would be easy for me to give you the reason of this, but you may be presumed to know it already.

Born and brought up in the presence and under the influence of a system which at once strikes at the very foundation of morals, by denying — if not the existence of God — the equal brotherhood of mankind, by degrading one part of the human family to the condition of brutes, and by reversing all right ideas of justice and of brotherly kindness, it is almost impossible that one so environed [sic] can greatly grow in virtuous rectitude.

You, however, sir, have risen superior to these unhallowed influences, and have added another striking proof to those already existing, that the heart of the slaveholder is still within the reach of the truth, and that to him the duty of letting “the oppressed go free,” is not in vain.

I shall no longer regard you as an enemy to freedom, nor to myself — but shall hail you as a friend to both. — Before doing so, however, I have one reasonable request to make of you, with which you will, I hope, comply. It is thus: That you make your conversion to anti-slavery known to the world, by precept as well as example. A publication of the facts relating to the emancipation of the slaves, with the reasons that have led you to this humane act, would doubtless prove highly beneficial to the cause of freedom generally — at the same time that it would place yourself in that high estimation of the public mind to which your generous conduct justly entitles you. I think you have no right to put your candle under a bushel. Your case is different in many respects from that of most repentant slaveholders. You have been publicly and peculiarly exposed before the world for being a slaveholder; and, since you have ceased to be such, a just regard for your own standing among men, as well as a desire to promote the happiness of a deeply injured people, requires you to make known your sentiments on this important subject. It would be truly an interesting and a glorious spectacle to see master and slave, hand in hand, laboring together for the overthrow of American slavery. I am sure that such an example would tell with thrilling effect upon the public mind of this section. We have already had the example of slaves and slaveholders side by side battling for freedom; but we yet lack a master working by the side of his former slave on the anti-slavery platform. You have it in your power to supply this deficiency; and if you can bring yourself to do so, you will attain a larger degree of happiness for yourself, and will confer a greater blessing on the cause of freedom, than you have already done by the generous act of emancipating your own slaves. With the example before me, I shall not despair of yet having the pleasure of giving you the right hand of fellowship on the anti-slavery platform.

Before closing the present letter, I wish to set you right about a matter which is, perhaps, of small importance to yourself, but is of considerable consequence to me.

In your letter, written three years ago, to Mr. A. C. C. Thompson, of Wilmington, respecting the validity of my narrative, you complained that I failed to mention your intention to emancipate me at the age of 25. The reason of this failure is as follows: You will remember that your promise to emancipate me preceded my first attempt to escape; and that you then told me that you would have emancipated me, had I not made the attempt in question. If you ask me why I distrusted your promise in the first instance, I could give you many reasons; but the one that weighed most with me was the passage of a law in Maryland, throwing obstructions in the way of emancipation; and I had heard you refer to that law as an excuse for continuing your slaves in bondage; and, supposing the obstructions alluded to might prove insuperable barriers to my freedom, I resolved upon flight as the only alternative left me short of a life of slavery. I hope this explanation will be satisfactory. I do not regret what I have done, but rather rejoice in it, as well for your sake as mine. Nevertheless, I wish to be fairly understood, and have, therefore, made the explanation.

I shall here conclude this letter, by again expressing my sincere gratitude at the magnanimous deed with which your name is now associated — and by repeating the ardent hope that you will publicly identify yourself with the holy cause of freedom, to which, since I left your service, I have been most unremittingly devoting myself.

I am, Dear Sir, very respectfully yours,