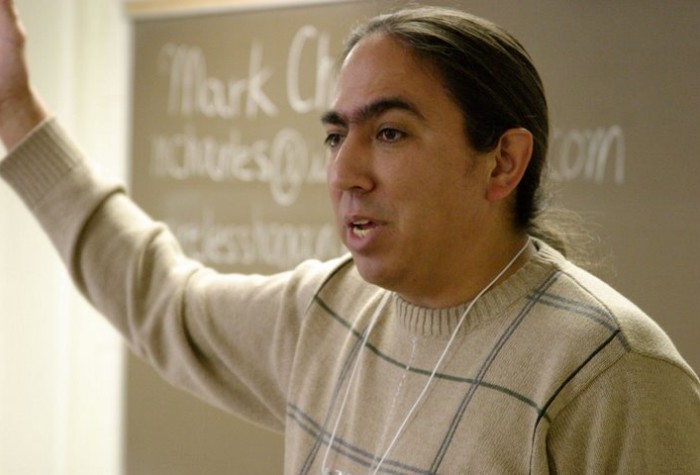 A Christian blogger recently shared his reflections on the prominent InterVarsity Missions Conference Urbana 15, claiming that one experience in particular was so profound, it was singularly influential in his decision to skip communion — a tradition he faithfully anticipates and habitually enjoys with fellow attendees.

Yep, this year was different.

Native American activist Mark Charles reluctantly refused to participate because he felt an emotional discomfort and spiritual disease relating to the passionate plenary session on the Black Lives Matter movement. According to his reflection, the information presented in the Black Lives Matter session made such an impact on Charles, his spirit was convicted to the point of not only being unable to celebrate communion, but also being unable to participate in the plenary session on the following night that was organized to pray for Christians around the world who’re suffering persecution, in addition to the persecutors.

Charles, who speaks regularly about Christianity and indigenous peoples, has gained increasing visibility in Evangelical circles. In addition to writing for the Evangelical Left publication Sojourners, the Navajo writer spoke at the prominent Q Ideas conference last May in Boston and at Evangelical Dordt College in November, in addition to Urbana 15.

The blogger based his decision not to celebrate communion on Paul’s exhortation of Christians to personally and spiritually examine themselves prior to celebrating the breaking of bread and drinking the wine in 1 Corinthians 11:17-34. To further justify his abstention, Charles invoked Mathew 5:23-24, Jesus’ admonishment of his followers to be reconciled to one another prior to placing their offering at the altar.

Though Charles distills the Corinthian passage within its proper context in the course of his lamentation, I think he improperly applies the passage, and its interpretation, to justify his refusal to celebrate communion. As Charles notes, Paul rebukes the Christians in Corinth because,

There are divisions among them. They are not waiting or showing concern for each other. Some are going hungry while others are getting drunk. They are forgetting the significance of the Lord’s supper (sic) and, therefore, are eating and drinking judgment (sic) upon themselves.

I don’t think appropriately rebuking believers for a lack of humility and love, which perpetuates physical and material divisiveness in the church, resulting in divine judgment for doing so, can be laterally applied to justifying and declining communion because of what Black Lives Matter represents. The two aren’t the same. The blogger’s spirit may have been convicted, but I think he was wrong.

Charles offered a rambling confession and justification for refusing communion, which highlights the confusion and artificiality that afflicts the church in its attempts to faithfully and diligently discuss and confront racial discrimination. He explains:

My spirit was stuck on the previous night. My mind was still pondering the statistics throughout the nation that clearly demonstrate that in the United States of America Black Lives do not Matter. Natives lives do not matter. The lives of people of color do not fully matter.

Urbana 2015 had opened a can of worms and started a very public conversation on race but that conversation was nowhere near finished. Divisions had been identified, but they were not brought together. Brokenness had been exposed, but it was not healed.

We needed to pray. Not for the persecuted Christians living in other countries, but for the persecuted people of color living right here in the United States of America. We needed to pray for the communities that had endured genocide, stolen lands, broken treaties, enslavement, Jim Crow laws, boarding schools, internment camps, segregation, deportation, and mass incarceration…

I think most reasonable people can agree that some very bad things happened to racial minorities during the course of the nation’s history. These bad things were perpetuated by violence, force, coercion and manipulation and were justified based on racial discrimination, ethnic and national chauvinism, and sadly, Christianity. No doubt. And as reasonable people, we can reflect on these dark and regrettable episodes, acknowledging the evil done and when appropriate offering remorse and confessions of wrongdoing and praying that history doesn’t repeat itself.

But with respect to his concern for racial minorities, his scattershot and repetitious platitudes regarding the plight of “people of color” simply misses the mark. What statistics prove that black lives don’t matter? Or that Native lives don’t matter? Or that people of color don’t matter? Saying and repeating these empty clichés and turning them into social justice proverbs in the fight against “racial justice” might make like-minded people feel good about themselves, but they do very little else.

Look, I get the desire to fight racial discrimination; I really do. But the idea that Christians should support an organization like Black Lives Matter, or reflexively believe its dishonest talking points not only offends common sense, but supporting half-hearted attempts to fight discrimination is a clear violation of our Christian obligation to lead the fight against injustice whatever form it takes.

Moreover, supporting Black Lives Matter is lazy activism. Actually, it’s not activism at all. It’s a public display — theater really — to show the viewing public that you hold the socially acceptable view on this social/political trend to avoid being morally implicated or socially associated with the “problem” this organization claims to address.

To the point, I’m convinced that people don’t really want to address racial discrimination and inequality — where it actually exists. The waters are intentionally muddied so people can’t see or think clearly about the issue — in this case, directly addressing the “root causes” of racial disparities to lay blame on that which is responsible — even if and when it means to do so implicates the suffering. Instead, this has become a cause without end — for if it ends, people would no longer have the prospect of feeling good about themselves by marginalizing racism through public displays of fruitless, self-aggrandizing, abstract forms of “activism” that are nothing more than a therapeutic salve for our collective racial insecurities.

For whites — Christian and non-Christian alike — forthrightly addressing racial discrimination and inequality or the sake of the affected would mean no longer engaging in obligatory acts of charity that disempower minorities simply to absolve feelings of racial guilt. It would also mean rejecting the premise that the mere existence of racial disparities are themselves evidence of racism. In other words it means refusing the predetermined parameters of the current “conversation on race,” which include being forced to acknowledge and admit white privilege and accepting blame for all that befalls racial minorities- and doing so knowing that baseless charges of racism will ensue. It will be difficult, but as Christians, in some respect, it’s picking up your cross in pursuit and obedience of the one who died on it.

For blacks, again, Christian and non-Christian alike, candidly addressing racial discrimination and racial inequality means no longer willingly relishing racial victimization and helplessness, while using it as a form of power/social leverage to extract more white guilt in the form of continued and forced moral genuflections, and social reparation. Instead it means acknowledging responsibility and embracing the obligation to engage the same kind of self-determination our antecedents relied on for dignity and success in far more difficult circumstances than we face, in a country that was significantly more racist than it is today. This will be difficult as well — very difficult actually — because to choose self-determination over victimization and white guilt is considered racial betrayal, violating the unwritten rules of black racial solidarity that leads to racial excommunication. But, this too, is bearing one’s cross in pursuit and obedience of the one who died on it.

It’s easy to stand against racial discrimination, racial inequality and other disparities — in this case, empathizing with or supporting Black Lives Matter. It’s much more difficult to remove the carefully and intentionally placed obstructions to see if “systemic racism” exists — and if so, where — and then determine what can be done to eliminate it. That’s our job as Christians.

Accommodating fear with lies doesn’t address the complexity of this issue nor does it do anything to help those in need.

And it certainly doesn’t help when Christians mistake lies for truth, allowing it to come between communion with one another, regardless of race, in commemoration of the one whose self-sacrificial act of obedience removed the superimposed divisions we continue to create and thrust upon ourselves.

Nothing should come between Christians and communion — especially something as blatantly superficial and disingenuous as Black Lives Matter.